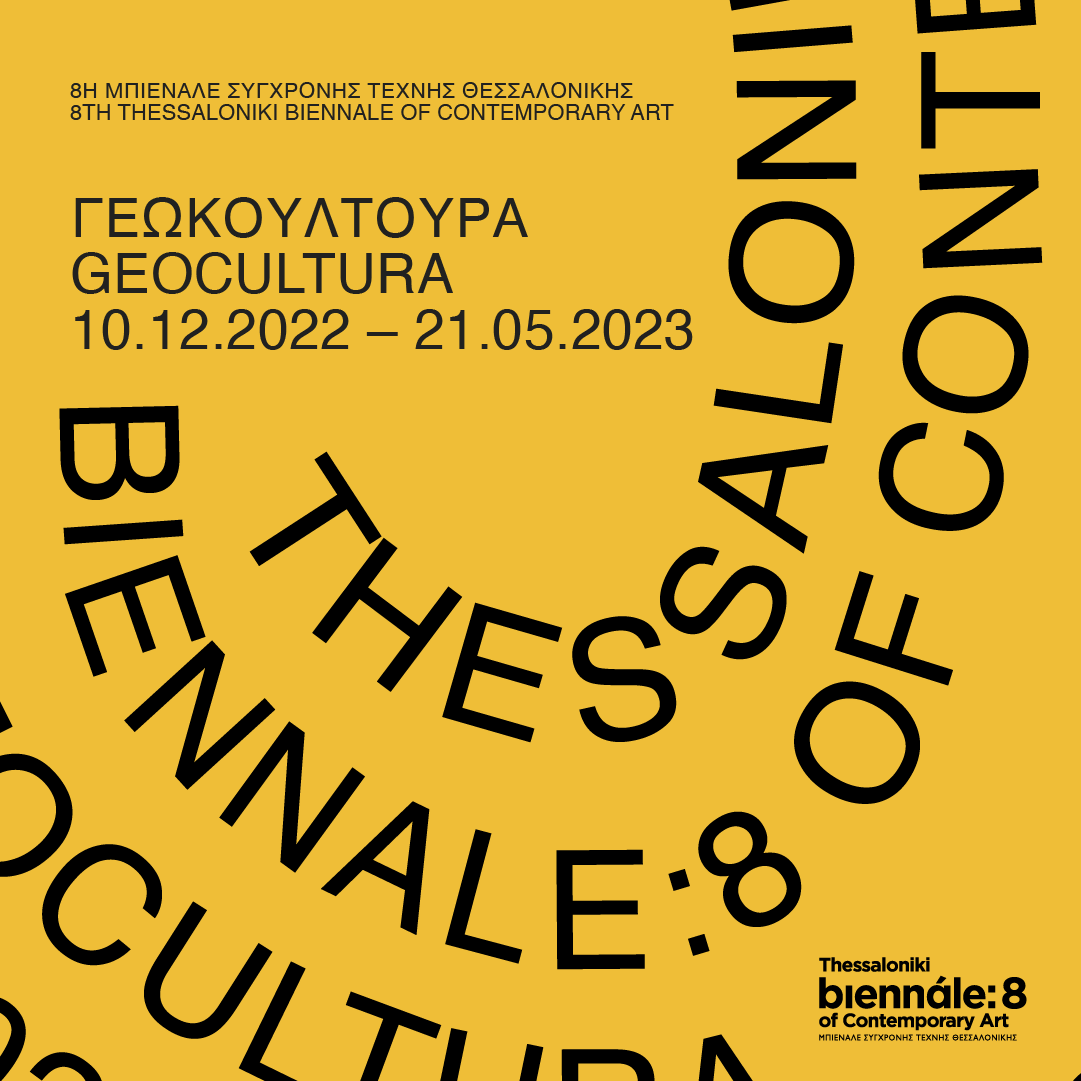 The Biennale will be inaugurated by Mr. Nicholas Yatromanolakis, Deputy Minister of Culture and Sports, responsible for Contemporary Culture.

The exchange of ideas, values and norms, within a context of a multitude of cultural, geographical and political debates and conflicts, is at the core of the concept of 'geoculture' in the political and social sciences. This is the rationale behind the decision of the 8th Thessaloniki's Biennale of Contemporary Art to turn its attention to the terms 'land' (“geo-”) and 'culture', connecting the cultivation of land with culture, understood as a set of resources, texts and practices which are available to people, helping them better understand and more effectively act in the world. It explores issues of memory, history, and managing both the natural and man-made environment, under the conditions of the climate, economic and refugee crises.

The participating artists focus on histories of places and people; they touch upon issues of identity, ethics, equity and sustainability; they suggest improvised ecological technologies; they explore the potential for collective existence and question the systems by which production, consumption and profitability are organized; they put into practice ideas of resource sharing and equitable living, as well as ways of reassessing the commodification of human and non-human life. Through their works, imagination becomes a crucial factor in facilitating the audience to imagine different futures.

Firmly believing that art broadens our understanding of the world, the 8th Biennale seeks not only to raise environmental awareness, but also to multiply future possibilities, with new claims and visions. The 8th Thessaloniki Biennale of Contemporary Art under the general title “Geocultura” aspires to serve as a means of communication with the world, as an act of justice and freedom, of trust and progressive thinking.

The programme of the 8th Thessaloniki Biennale of Contemporary Art begins on December 10, 2022, finds its peak on March 4, 2023 with the opening of the main exhibition “Being as Communion” and ends on May 21, 2023, with its new productions.

Exhibition “Graceland. The triumph of an uncertain path”

Venue: MOMus-Experimental Center for the Arts

The exhibition is a collective project by the visual artists Rania Emmanouilidou, Fani Boudouroglou and Evangelia Psoma, who experiment with various production techniques of bioplastic, paper, crystal cultivation, plantings and permaculture and create a collective worok in progress, a common place of artistic symbiosis that invites the public in an immersive experience. Believing that nothing is left untouched and stable anymore, the exhibition promises us an enclosed garden in the world that threatens us, while recognising that no shelter can protect us from the unpredictable.

The Ark concept defines various applications, repositories, and banks and collection activities that aim to rescue, protect, and preserve data, objects, and information for future use. We know that irresponsible use and abuse has led to much of the climate change and environmental degradation we face today. Storms exist as part of natural weather patterns on the planet, but warmer oceans produce stronger storms and heavier rains, which in turn increase flooding.

The aim of the exhibition is to present the visual visions, searches and inventive ways of approaching the recently emerging conditions, such as the decline of the bee, deforestation, air pollution, overheating, desertification, the food crisis, overexploitation of water resources, consumerism and climate change which altogether fight against the environment's dynamics to inspire, protect, breathe, heal, regenerate.

The award-winning project "Climate Parliament of all Beings and Non-Beings" by metagarten - Amelie Hensel and Judith Henning (Hamburg, Germany) and helfersyndrom - Steffen Lars Popp (Offenbach, Germany) has been enriched by the narrative, methodological forms of Yannis Angelis (Bad Homburg, Germany). This new version entitled "Climate Parliament. Stories of the Non-Human", which is the synthesis of an artistic approach based on creativity, storytelling, community practices, mobilization, and empathy, comes to MOMUS and the 8thThessaloniki Biennale Contemporary Art.

Project “Urban vineyard of the City of Thessaloniki”

The urban vineyard of the City of Thessaloniki was created in 2013 in the heart of the city, in the area of ​​the Kaftantzoglio Stadium, in the area where the municipal machine shop used to be, as a result of the collaboration of the Municipality of Thessaloniki with the Viticulture Laboratory of the AUTH and the Ktima Gerovassiliou. It is the only urban vineyard nationwide. About 480 plants of wine-making varieties were planted: Xinomavro, Agiorgitiko, Malagouzia and Robola were the four Greek grape varieties that had been chosen. The urban vineyard gives added value to the reputation of Thessaloniki and strengthens the narrative of the wine and culinary culture of the city.

The exhibition hosts works by postgraduate students of the Aristotle University of Thessaloniki Landscape Architecture. Architects, Agronomists, Foresters, Civil Engineers, Spatial Planners, Environmental Engineers, plan, in the context of the course 'Landscape Design, Urban Outdoor Spaces', the location of the Thessaloniki International Fair as a modern urban center park that the city lacks.

Recreating and highlighting the image of the city from its history, natural and cultural, ensuring free public living space, urban livability, upgraded quality, natural continuity and greenery, is the creative contribution of the projects to our urban geoculture. In any case, according to the dynamics of the landscape, nature and culture which seems to have been forgotten, in the otherwise nerve-wracking sphere of the city's public space, a place for which there is a rich material of claims, visions and designs from Hebrard even and to this day.

The project hosts the video by the photographer Manolis Baboussis, who narrates to the trees his thoughts on the image, the teaching process, the art and its history, in the frame of a bigger project he conducted himself back in 2011 at the Fine Arts School of Athens, while he tried to transform the School’s parking area into a garden, without any intervention.

The participating artists Alexandra Marati – Anna Vdakoglou, Aikaterini Gegisian and Kiril Prashkov awake our senses through “biodynamic gardens”, projecting in a visual way the biological cycles of the earth and untinately of our lives, altering known works of art and giving them an unexpected sleight of hand.

The exhibition is in dialect with the exhibition “Organic Art. The Avant-garde in Petrograd (on show in the museum until 21.05.2023), in which the theory of the Russian visual artist and musician Mikhail Matiushin from the early 1920’s is reflected, that art exists in nature, in the microcosm and the macrocosm and a special training of our senses and especially vision is needed in order to detect it.

Exhibition “Down to Earth”

The exhibition - a collective proposal by the MOMus curators’ team - presents the works of contemporary Greek visual artists, who, through different means and perspectives, propose a show focused on the values and processes of the earth itself. Art returns to nature, attempting to contribute to the formation of new ways of thinking and being, in order to become a fertile field for an alternative view of the world and for a fruitful symbiosis between the social and the natural.

Exhibition “Yiannis and Miltos Manakia. People behind the lens Project”

Venue: Museum of the Macedonian Struggle

Yiannis and Miltos Manakia, originally from Abdella Grevenon, will travel through the countryside and the large urban centers of the Balkans, documenting not only the lives of the hardworking people, moments of relaxation and entertainment but also architectural landmarks, historical and social events that mark the changes of the first half of the 20th century.

Exhibition “Christos Dikeakos. The world as an open studio”

Having Thessaloniki as his place of origin and maintaining a prominent artistic profile in the Vancouver art scene since the 1970s, Christos Dikeakos (1946) has been using photographic practices to explore issues such as memory, history and the treatment of both the natural and the man-made environment. His oeuvre particularly focuses on the use of land in interaction with the way modern civilization spreads by shrinking native cultures, which are directly connected to nature.

Dikeakos’ work seeks for a deeper understanding of particular ecosystems as examples of different approaches to the environment. This retrospective exhibition –first ever shown in Greece- includes works from the artist's photographic series from the 1970s onwards, creating a kind of retrospective exhibition that will introduce the Greek public to an important artist of the diaspora.

Main exhibition “Being as Communion”

The main exhibition of the 8th Thessaloniki Biennial of Contemporary Art aims to think critically about co-existence and collaborative practices as creative tools for handling the multiple crises that we face. Thinking through being as communion, 28 artists via their respective practices touch on various forms of more than human collaborations, with our spectral past and our challenging present, thinking of how we can co-exist with animate life around us, the land that we stand on, the food that we eat and the air that we breathe. “Being as Communion” will focus on inclusive practices that explore different forms of care, love and mutuality, whilst also proposing generous forms of support systems. Invited artists and artist collectives will explore the human impact on the eco-systems that we share, whilst suggesting forms of more equitable existence, for humanimal survival, probing to what extent we can learn new ways of being with, rather than dominating the world around us.

Ten key sites and museums of the city of Thessaloniki will host the exhibition’s works, in dialogue with the city’s layered history, allowing for a polyphonic reading of the exhibition in ten equal parts.

The land, the relationship with the environment and those that make it up as well as what emerges from this context, act as a filed of inspiration and action for the artists who will give with their performances will give a performative dimension to the general theme of Biennale’s “geocultura”.

The programme will be announced

The “Peliti” at the 8th Thessaloniki Biennale of Contemporary Art

The 8th Thessaloniki Biennale of Contemporary Art and MOMus support the construction of the “Peliti” Seed Bank, which since 1995 has managed to change the image of Greece in relation to traditional seed varieties. Alongside, the “Peliti” has managed to influence the situation in Bulgaria, in Cyprus, in Turkey, in Europe, in African countries and in recent years it also affects the situation in the USA. The collaboration with “Peliti” will take many different forms, in an effort to strengthen the work of the community.

In the same context of valuing and supporting solidarity actions, the 8th Thessaloniki Biennale of Contemporary Art and MOMus collaborate with the autonomous group “Chefs for Zero Hunger”. The group of chefs, who are active in Thessaloniki with the slogan "no one alone, no one hungry” cook with their own resources and without financial consideration for those in need, primarily the unemployed and homeless, with locality, seasonality and tradition as the main axes.