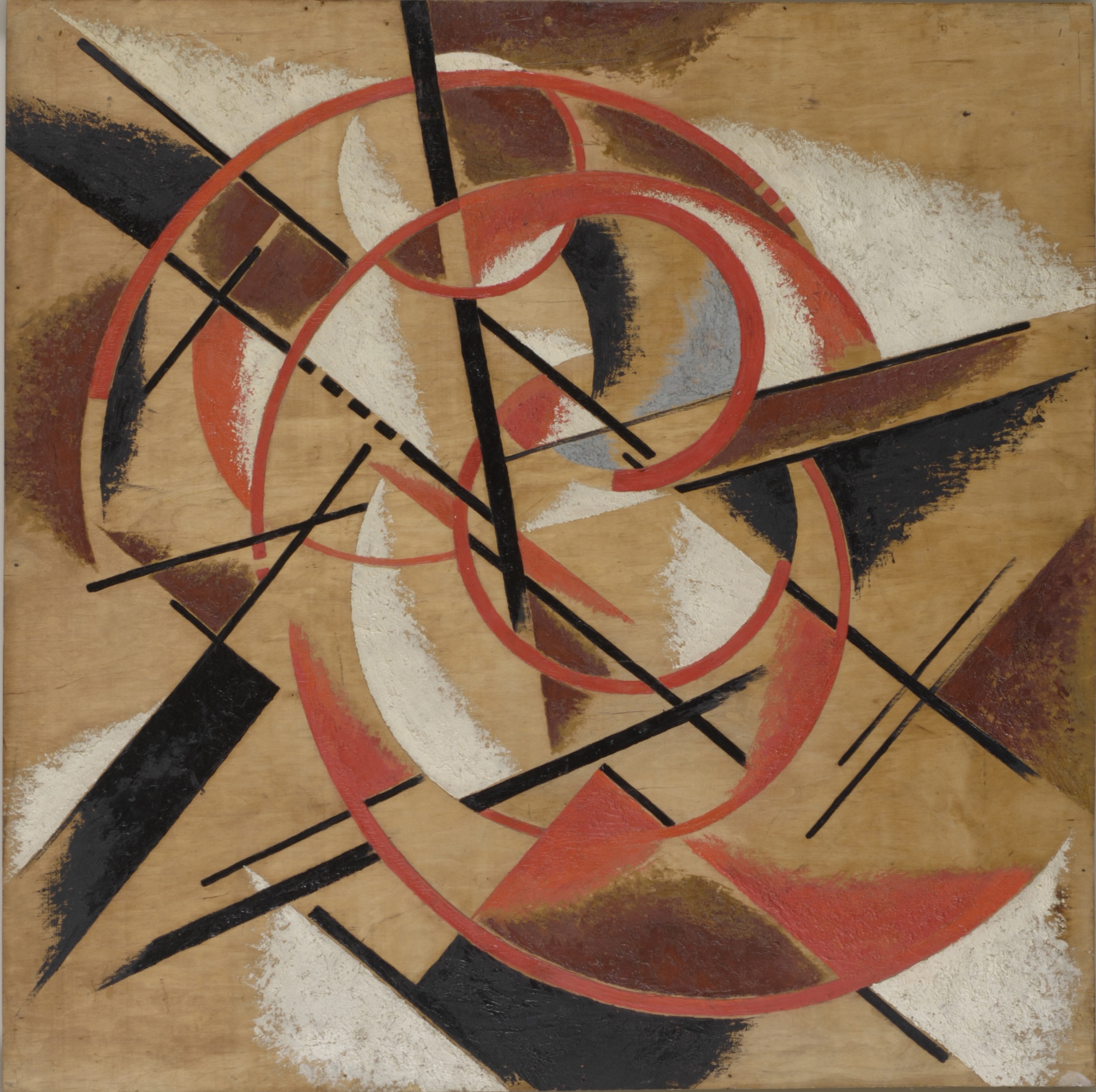 Liubov Popova (1889-1924) was a painter, a theorist, an art professor and a designer, one of the so called ‘Amazons’ of the Russian avant garde period, a bold traveller, a researcher, an experimenter and creator of new aesthetic proposals in the beginning of the 20th century; she was also the only artist who the collector George Costakis called after her first name, although he never met her. Liubov Popova is the focus of the new exhibition organised and hosted by the MOMus-Museum of Modern Art-Costakis collection in Thessaloniki, Greece, under the title ‘Liubov Popova. Form. Colour. Space’ from October 12, 2019 until March 1, 2020, in Thessaloniki, Greece. (Opening: Friday, October 11, 2019, 20:00. The exhibition will be open to the public from 10:00, admission free for the opening day only. Opening days & hours, Tu-We-Fr-Sat-Su 10:00-18:00, Thu 10:00-22:00), Monday closed)

Liubov Popova started as a student of Impressionism and Cezannism, she included in her early works French Fauvism, she studied thoroughly the new forms and techniques; she also made a solid contribution to the development of such art schools as Cubofuturism, Suprematism, and Constructivism. She created constructivist works using her personal, unique style, while leading art to production and creation of unique design proposals, graphic design, theatrical stages, textiles and costumes. This put  her name without doubt amongst the most prominent representatives of the Russian avant garde. She was also a great teacher who set new, high standards in teaching in the Higher Artistic and Technical Studios (VKhUTEMAS) from 1921 until her early death in 1924.

The exhibition hosts almost all works and archival material -more than 200 pieces- from the MOMus-Museum of Modern Art-Costakis collection, alongside with unique works by private collections, while this is the first large- scale show of Popova’s works in three recent decades, making it an extraordinary event in the international art and museum milieu. The Museum’s new exhibition plan represents a series of exhibitions highlighting the key figures of Russian avant- garde, whose works are in Museum’s custody; the exhibition. The series opens with the big scale exhibition ‘Liubov Popova. Form. Colour Space’.

Tours open to the public (visitors have to present their tickets of the entrance) Every Saturday at 12:00

International scholars of Russian avant garde focus on the artistic and teaching work of Liubov Popova.

Opening night will feature a dramatized narrative/ performance under the title "Life as a work of art", by the National Theatre of Northern Greece based on texts by the Russian writer Daniil Kharms, about whom the poet Alexander Vvedensky wrote: "Kharms did not make art, he was art". Three NTNG actors will perform snapshots from Kharms’ life, as he recorded them in his Blue Notebook. The performance is directed by Thanos Feretzelis. The salient features of Kharms’ work are the search for the unattainable, black humour, a mischievous style, recording the absurdity of every era, and the futility of existence.

Popova’s brother, university professor Pavel Sergeevich Popov, had a stepson S. N. Holmberg, who lived in Zvenigorod, outside Moscow; one of the most interesting stories is without doubt when the collector George Costakis saw a painting of Popova’s ‘Space Force Construction’ series during his first visit to that house, a painting which today belongs to the collection of MOMus. “[…] the first thing I saw at the top of the stairs was one of Popova’s paintings on plywood, used to support a laundry basin. Later we walked out into the garden. I noticed a shed, whose window was covered with a piece of plywood. On the plywood I could read a number and below it the signature “Popova”. I went into the shed and saw the other side of the plywood. It was a great painting! “No, I can’t let you have it. If it rains the inside of the shed will get wet. Bring me some plywood first, and then I will give you the painting.” I had to go back to Moscow and look for some plywood. I couldn’t find the size I needed, so I bought two smaller pieces and brought them to Zvenigorod. In return, the owner gave me that wonderful painting. He sold the rest of the paintings to me for a very low price too. So I bought most of Popova’s works from the family.[…]”

Aliki Costaki, daughter of collector George Costakis, narrates a story that involves her parents and Liubov Popova “[…] At some point, in the mid-90s I met an old photographer friend, Igor Palmin, in Moscow. We spoke a lot and reminisced about the good old days. And suddenly he said to me: “You know, Zina (my mother) was seriously jealous of George with Liubov, and she often used to say ‘You’re always talking about Liubov this, and Liubov that!’” There was some truth in what he said. My father never referred to any other artist by his or her first name, only Liubov. He loved Liubov very much.”

1889   April 24. Born in Ivanovskoe, near Moscow to parents Sergei Maksimovich Popov and Liubov Vasilievna Zubova. Her father is a textile merchant and supports the arts. She has an elder brother, Sergei, a younger brother Pavel and a younger sister, Olga.

1902  Moves with her family to Yalta, Crimea. Attends the Yaltinskaya Women’s Gymnasium.

1906   Moves to Moscow with her family and enrolls at the Arsenievna Gymnasium. Studies at A. S. Alfierov’s school for two years.

1907   Studies under Stanislav Zhukovsky at his studio.

1909  Autumn. Travels to Kiev. Visits the Church of St. Cyril and sees works by Mikhail Vrubel.

1910   Travels to Italy with her family. Visits sites of Renaissance art. Summer. Travels to Pskov and Novgorod to study icons.

1911 Travels to Russian ancient cities. Sets up a studio together with Liudmila Prudicorskaya in Moscow.

1913  Meets Alexander Archipenko and Ossip Zadkine in Paris May. Visits Brittany with sculptors Mukhina and Boris Ternovets. Summer. Returns to Moscow, rejoins the studio of Tatlin.

By the end of the year her apartment has become a meeting place for artists and philosophers.

1916  Participates in the exhibition the Store, Moscow. April. Travels with her family to Samarkand. May. Travels to Birsk. Joins the SUPREMUS Society of Kazimir Malevich at Verbovka village folk centre and designs the logo of the group’s edition. November. Participates in the Knave of Diamonds 5 exhibition. December. Exhibits in Modern Russian Painting, Dobychina Art Bureau, Petrograd.

1918  March. Marries Boris von Eding, an art historian. May. Participates in the First Exhibition of Paintings of the Professional Association of Artists, Moscow. November. Gives birth to her son.

1920  May. Becomes a member of INKhUK. November. Becomes a professor at VKhUTEMAS and teaches Color Discipline with Vesnin. Designs stage sets and costumes for Aleksandr Tairov’s production of Romeo and Juliet at the Chamber Theater, Moscow.

1921  January-March. Participates in the Composition and Construction discussions at INKhUk. Designs the sets for Vsevolod Meyerkhold’s mass festival “Struggle and Victory of the Soviets”, together with Vesnin. Teaches at the State Institute of Theatrical Art, Gitis, headed by Meyerkhold. September. Contributes five paintings in the exhibition 5 × 5 = 25, Moscow. Signs the proclamation of the end of easel painting, together with Aleksandr Rodchenko and other INKhUK members. Becomes occupied with art in production and designs textiles, porcelains, books and theatre sets.

1923 Designs stages sets and costumes for Meyerkhold’s production of “Earth in Turmoil”. Joins the Productivist Department at VKhUMTEMAS in order to teach graphic design and theatrical stage sets Travels with Vesnin to Caucasus. Designs textiles and clothing at the First State Textile Print Factory, Moscow, together with Varvara Stepanova

Special Acknowledgement for the support of the exhibition:

to Kristina Krasnyanskaya,  president of the board of trustees of MOMus-Museum of Modern Art-Costakis collection.

to the Board of Administration and Directors of NTNG.