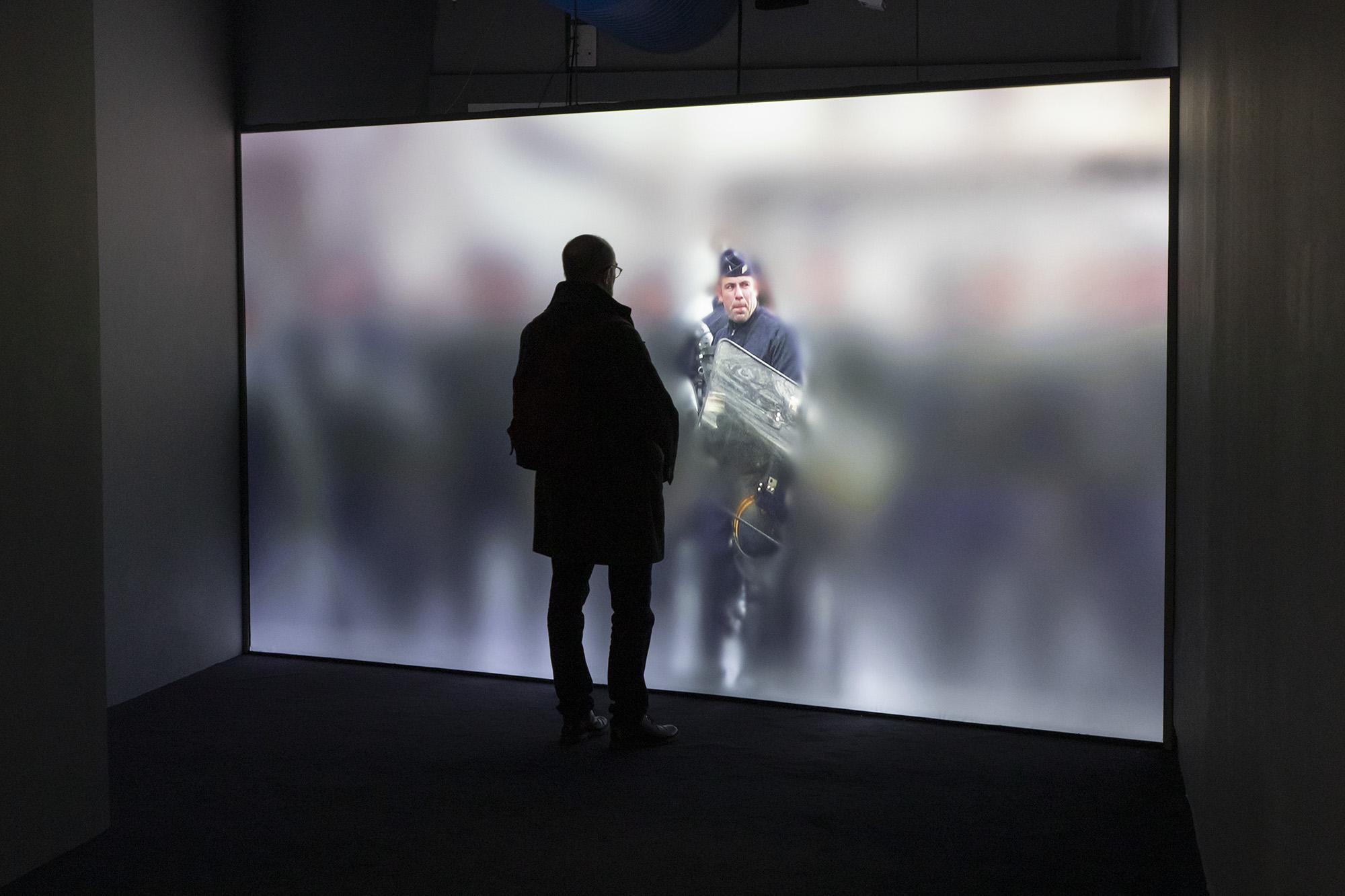 With the support: Rosa Luxemburg Foundation

Samuel Bianchini’s (2007-2020) interactive installation niform lends itself to multiple reflections. In a dark room, the spectator sees the projection of a blurry image, which becomes increasingly sharper as the viewer approaches it, but only for the shape of the spectator’s body. When the spectator stands half a meter away from the image, what is revealed is a fragment of a group portrait of life-sized, reposing French riot policemen in full gear.

Contemporary spectators often feel bewildered by the continuous alternation of images that besiege them. The roles here are reversed: it is the spectator’s own performativity, positioning and distance that define how much of the image becomes clear. Besides, niform stems from the word uniform, with the omission of the letter u, indicating that the audience is a crucial factor for the completion of the work. Interactive and participatory viewing are essential here: no one is able to see the whole picture alone. Likewise, if the viewer approaches close enough to see clearly, they will still miss the larger picture. The human forms, even when visible, appear suspended in a space lacking any perspective. The viewer is invited to examine the perception of the representation as an intrinsically elliptical process, in which immobility consolidates a restrictive point of view. Besides, can one, at any given moment, perceive much more from the fragment of reality surrounding him? niform asks the viewer to realize that the image becomes visible only thanks to their own position and stance. And even this may not be enough, since it is not the spectator the one selecting the image or the algorithm that regulates how the image is increasingly coming into focus.

Another aspect of niform’s group portrayal of men serving with French law enforcement is that it serves as a reflection on power itself: invisible at first, but becoming discernible at close distance, it is just a limit beyond which one’s vision is thwarted. But can real power be easily displayed, or is this a representation that will always tend to be elusive? Meanwhile, in yet another interesting reversal, it is the citizens inspecting the images of police officers. Bianchini, an experimental artist, theorist and researcher of new media, invites us to reflect on the rapidly evolving imaging technology, not as anodyne sensationalism, but as a matter of political thought, in which one investigates and challenges, immersed in a postmodern, 21st century platonic cave of shadows. niform allows us to ponder on the degree of freedom contemporary citizens have, at a time when the digital image-world appears omnipotent, suggesting, in a staged version of sousveillance*, that the police is not beyond observation or accountability, even in our bleak era of “total security”.

*The term sousveillance denotes the observation of power from below, as a defense to surveillance which means the supervision in its most classical sense, that is, the weaker from the stronger.

Samuel Bianchini (Nancy, b. 1971) is an artist and associate professor (accreditated to supervise research) at École nationale supérieure des Arts Décoratifs (EnsAD, PSL University, Paris)where he is the head the Reflective Interaction group of EnsadLab (EnsAD’s laboratory). Here, he is also co-head of la Chaire arts & sciences set up in 2017 with École polytechnique and the Daniel & Nina Carasso Foundation.

He lives and works in Paris. His creations involve physical as well as symbolic operations, in context, in public and in real time, stimulating us to contemplate, to think as much as to act.With more than 100 collective and 20 solo exhibitions, his works are regularly presented in Europe and around the world. In close relation to his research and artistic practice, Samuel Bianchini has undertaken theoretical work, which has led to numerous publications.

and, for his art publications, by mfc-michèle didier (Bruxelles, Paris) – www.micheledidier.com