Divided Memories 1940-1950. Between History and Experience 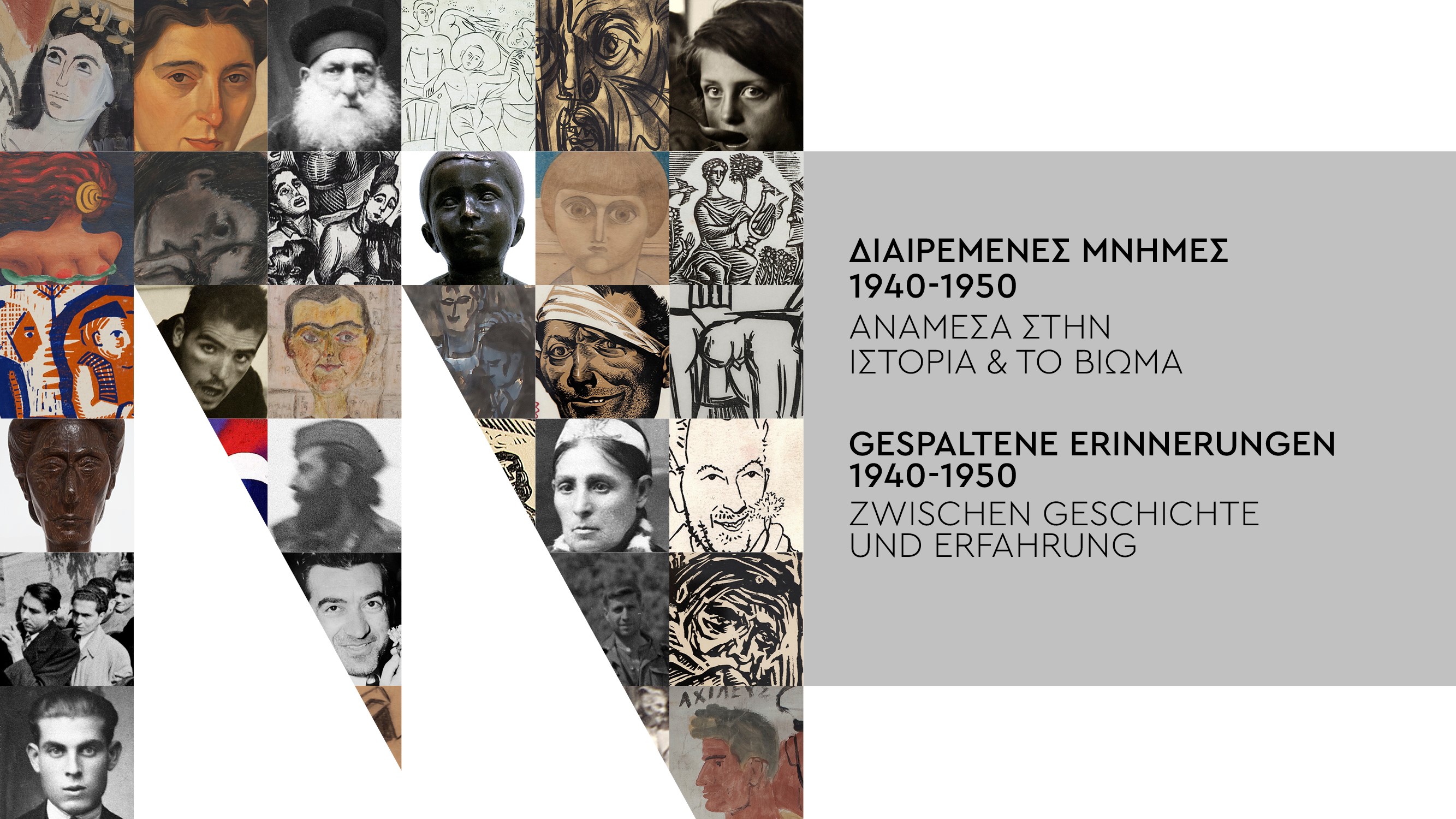 Between History and Experience”

“Divided Memories: 1940-1950. Between History and Experience”, the exhibition that had deeply moved audiences during its original run (December 2016-April 2017) in Thessaloniki at the Macedonian Museum of Contemporary Art, is now digital. The exhibition sheds light on the 1940s through records documenting the personal experiences of artists and intellectuals. Artworks, narratives and testimonies, documents, literary works, poetry, and historical texts dating to that momentous decade transform the pain, despair and hardships, and evoke creative and existential impasses, contradictions and hopes, reshaping official History.

It also examines the presence of the Jewish community of Thessaloniki since the 1930s, presents new evidence recording developments in the city during the German occupation and chronicling the deportation of the city’s Jews to Nazi extermination camps, as well as photographs of survivors and interviews with Thessaloniki Jews born after 1941.

The new, digital form of the exhibition was organized by the Goethe Institut Thessaloniki, the MOMus-Museum of Contemporary Art, the Jewish Museum of Thessaloniki and the NS-Dokumentationszentrum Köln (Documentation Center for National Socialism, City of Cologne). Although consisting of fewer (now digitized) exhibits, artworks and documents compared to the physical exhibition that had taken place in Thessaloniki in 2016, it remains a dense and historically important Greek presentation at the initiative of Thessaloniki and its institutions, presented this time on German soil.

The artistic part of the exhibition is organized into two sections: the first section starts with the Greek Epic of 1940 and presents life and death in the time of the German Occupation, with references, among others, to hunger and the black market, to the Resistance in Thessaloniki and across Greece –exemplified by the compulsory art exhibition of 1942 and the funeral of poet Kostis Palamas–, the mass executions and the criminal German retaliations.

The exhibits that comprise the second section relate to the transition to national liberation, the participation of artists in the Mountain Government of 1944, the Liberation of Athens and Greece, before moving on to the Dekemvriana (“December Events”) of 1944, the voyage of the “Mataroa” and the honorary donation by French artists and intellectuals to the Greek people as a “tribute” to the Greek Resistance. Finally, they relate to the Civil War, the rejection of national division by artists, and the exiles, imprisonments, torture, and executions. The exhibition concludes with a list of Greeks bestowed with the honorific “Righteous Among the Nations”, and with the post-war proposal to recognize the Greek Resistance as the foundation of Europe and civilization.

The part dedicated to the Jewish community is also divided into two sections. The first one focuses on the social and political problems faced by this community, while the second one presents the process by which the occupying forces came to control, expropriate and ultimately displace the Jewish population to Auschwitz.

This is a reflective curatorial effort that revisits the issues of the war’s declaration, the Battle of Pindus, the German invasion and occupation, the Resistance in Greek cities and mountains, the massacres of civilians, the Holocaust, National Liberation, and the political crisis that would lead to the Greek Civil War (1946-1949). This is done from the perspective of the artists' experiences, their dilemmas and attitudes as intellectuals facing in solidarity with the rest of the population a major political, social and, ultimately, humanitarian crisis.

The exhibition is implemented with the financial support of the ‘Hellenic-German Fund for the Future’ of the Ministry of Foreign Affairs of the Federal Republic of Germany.

Τhe accompanying bilingual (Greek-German) catalogue reflects the exhibition that was organized and presented in 2016-2017.

[Starting point of the exhibition]

It was guided by the various manifestations of cultural and artistic reality in the time of the German Occupation, the Greek Resistance, the 1944 Liberation and the Greek Civil War (1946-1949). That exhibition had juxtaposed the narratives discovered in the works of intellectuals and artists with the dominant ideological representations, while also highlighting issues of historical importance that remain largely unsettled, such as the transformation of Greek society which entailed the fate of Thessaloniki’s Jewish Community.

The contribution of the Macedonian Museum of Contemporary Art in the exhibits covered a wide range of works (paintings, sketches, photographs, sculptures, posters, political cartoons, videos, films, albums), documents (private and public archival material, publications, objects, letters, film documentaries) and forms of expression (e.g. literary texts), both as testimonies and forms of direct participation and as narratives that had changed across time. In doing so, the exhibition had attempted to shed some light on the issue of memory, also in relation to European reality. By focusing on the complexity of history and the differentiation of experiences, the exhibition confronted both the emotional dimension of human experiences and the cold typology of ideologies. The exhibition aspired to communicate emotions and experiences that transform the understandings of that specific period and specific society of audience members who might be unfamiliar with the era and its history.

The exhibits from the 1940s were a deeply personal human scream, as a reaction not only to the horrors of war and civil strife, but also to the miracles of nature and life. The stance taken by artists and intellectuals, without sparing the conqueror, the torturer and usurper, and without ever succumbing to the vulgarity that was omnipresent throughout that decade, kept open a window of light amidst the darkness, remaining generously accessible to every discourse, in an effort to purge the prevailing hatred, intolerance and death.

The Exiles, the imprisonments and executions, the Resistance, did not prevent them from rejecting war and violence or from maintaining open channels of communication despite their many differences. In the period’s periodicals and publications, in its theatre and intellectual gatherings, one sees the boldest, most humane, and most inventive forms of resistance – not only as political action, but mostly as a life stance and as a primary condition of doing art.

Part of the research was focused on Thessaloniki, the city’s unique geopolitical position and the cosmopolitanism of its pre-war society, economy and history that was tragically transformed by the Holocaust of its Jewish community.

The contribution of the Jewish Museum included unpublished historical records (documents, photographs, testimonies) dating as early as the 1930s. The records related to the demographical and geographical changes that influenced Thessaloniki’s Jewish population; local antisemitism; the electoral and political behaviour of the Jewish population; and to Jewish business and construction activity. New records were also presented that regarded developments in Thessaloniki at the time of the German occupation. They demonstrated the higher mortality rate among Jews at the time of the famine, the control of the Jewish Community by German authorities, local collaborationism, the destruction of the Jewish cemetery, the forced labour imposed on Jews and the ransom paid to buy it off. Other records presented a timeline of the displacement of Thessaloniki’s Jews to Nazi extermination camps, the demarcation of ghettos, the Baron Hirsch transit camp, the looting of Jewish properties, as well as the “erasing” of Jews from local records. They also included photographs of survivors and interviews with Thessaloniki Jews born after 1941.

NS-Dokumentationszentrum of the City of Cologne

Additional information can be found here: