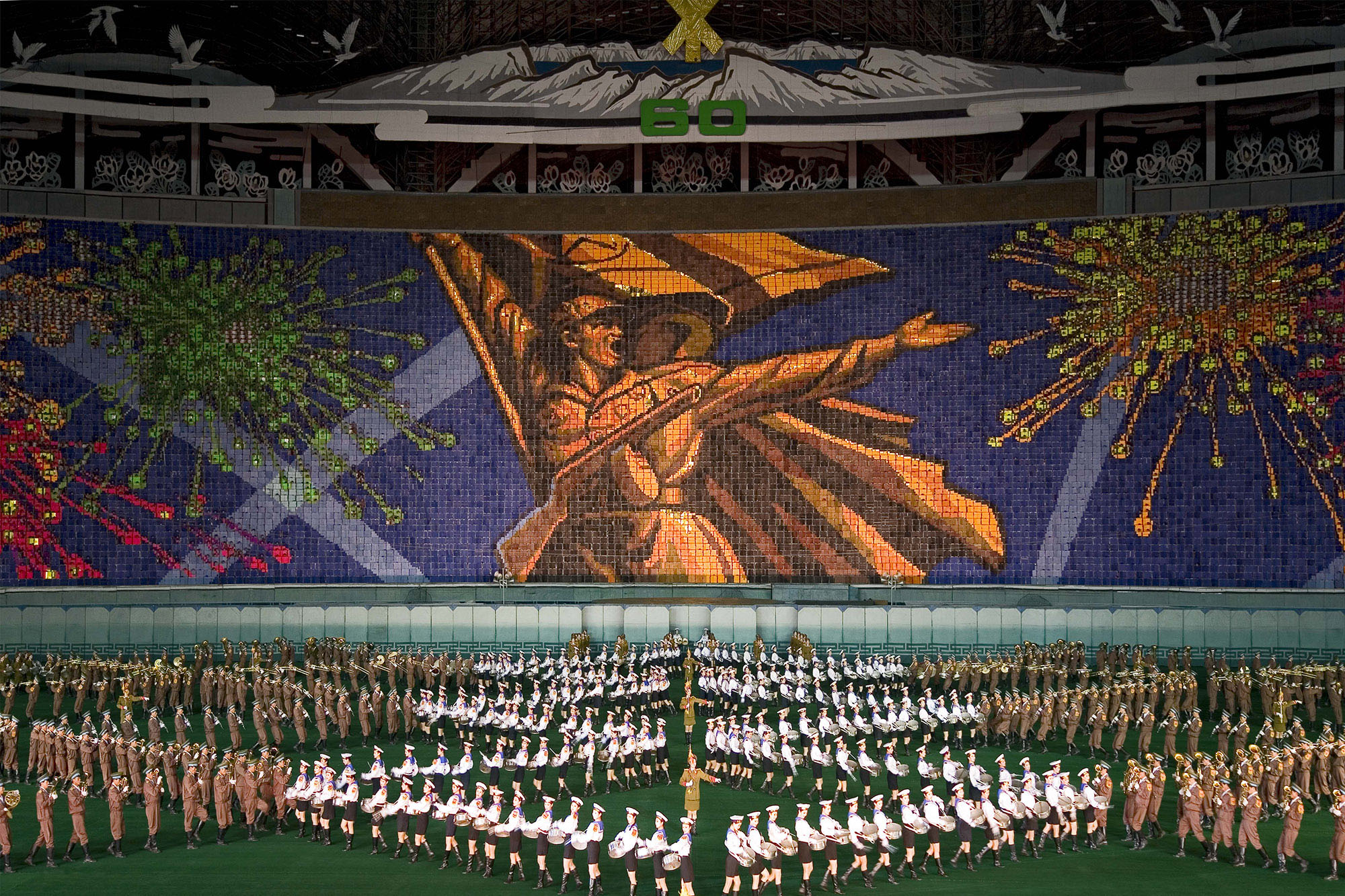 Arirang is a Korean folk song, a love story with thousands of variations, considered the country's anthem and estimated to be 600 years old. A UNESCO World Heritage Site it has been declared at the request of both South and North Korea.The Arirang Festival took place in Pyongyang between 2002 and 2013 and has been repeated since 2018. The Mass Games orchestrate North Korea's political narrative, with an emphasis on the Labor Party and the armed forces, and often blurred symbols: The rising sun symbolizes Kim Il-sung. The weapon is what the leader gave to his son as a legacy. The color red reflects the working class. The snow-capped mountain and lake represent Mount Paektu where Kim Jong-il is said to have been born in a hut. The Arirang Festival Mass Games are structured on two levels: on the one hand as a choreographed gymnastic demonstration in the center of the stadium performed by tens of thousands of gymnasts and dancers. This part shows the invaluable popular will to face every difficulty and danger. On the other hand, as an iconography composed by thousands of educated students, who form with colored cards a vivid, changing background. The huge mosaics of images that emerge offer the symbolic, ideological context, history, everyday life and achievements of the people. The two strands together constitute directed state propaganda carried out by the citizens.

Philippe Chancel gradually introduces us to the atmosphere of the events, with the deep multicolor and the vivid political symbolism. Absolute accuracy in execution metaphorically implies a society based on discipline and collectivity. The variation in the shooting distance allows us to study sometimes dynamic presentations towards historical or social landscapes of the country, and sometimes details that reveal the very structure of the background. If, however, one considers such a massive discipline and retreat of individuality in the context of a totalitarian regime to be graphic in the 21st century, Chancel's photographs from the Arirang Festival seem to send a timely message to Western societies, which adopt mass disciplines less visible in public space, but no less effective. A question that may arise is whether the man of the 21st century can remain participatory while at the same time strengthening his individual identity. Similarly, if, despite the distinct richness of nuances of this identity, we experience at the same time the largest attempt by the world to belong to a homogenized economic, political and cultural context.