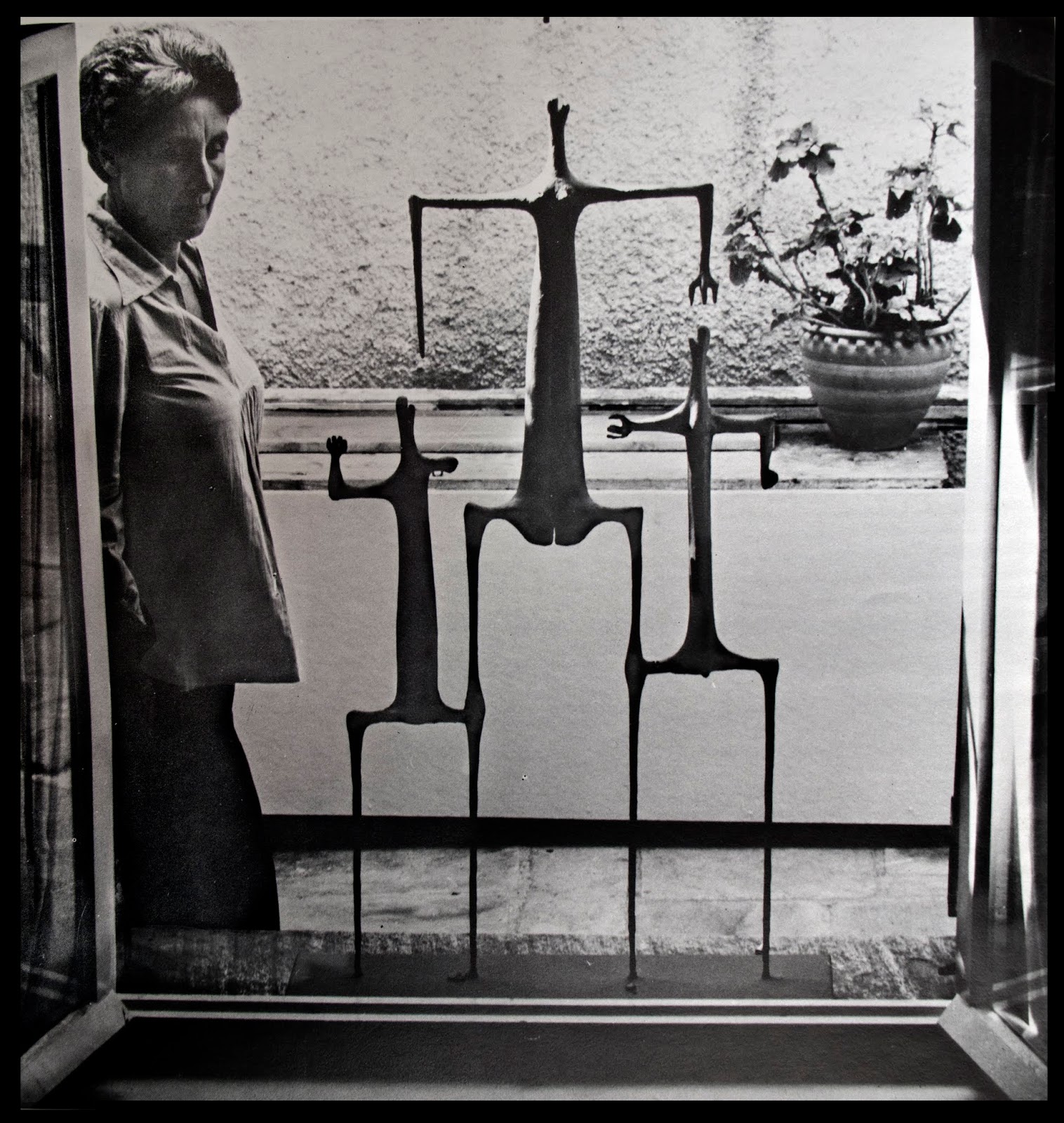 The truth, the power, the sensitivity and the poetics of Alex Mylonas' art are some of the elements highlighted in the exhibition "Alex Mylona. Retrospective " at MOMus-Museum Alex Mylona in Athens.

More than 120 works by Alex Mylona on the two floors of the museum-sculptures, watercolors, drawings - reflect, as the exhibition curator and art historian Yannis Bolis mentions, "a common thread which runs through the entire work of Alex Mylona: from the anthropocentric compositions she created in the 1950s, to the formality, austere stillness, coarseness and sharp ends, the game of lines, empty forms and vertical surfaces characterising her abstract wrought iron sculptures presented at the 1960 Venice Biennale; and from the twists and turns, the curves, the movements and tensions of the malleable sheet metal in Architectural Propositions (1976), to the exceptionally simplicity of sculptural form and the purity of geometrical marble surfaces with the joining of circles and semicircles, squares or rectangles. Two emblematic works in marble from 1998, Kouros and Kore, appear to "close the circle" (her words), summarising her varied and multidimensional life both as a person and as an artist. The art of Alex Mylona succeeds in transmuting emotion and moulding its vital relationship with the world; in touching the secret of existence, birth and death, motherhood and love; in combining the myths of the ancient Greek world - the birth of Aphrodite, the Minotaur and Medea - with the spirituality of Byzantium, to seek out the balances, to reflect on the nature and potential of plastic art, to suggest a new arrangement of space and surface, of rhythm and volumes, of positivity and negativity, of emptiness and wholeness, of materiality and form.

Alex Mylona (1920 - 2016)
Alex Mylona was born in Athens in 1920. Her parents recognised her artistic talent early, offering her the opportunity of taking painting lessons at the age of eight. In 1940 she married politician Georgios Mylonas. In 1943 their first daughter, Maria, was born, followed in 1944 by their second daughter, Eleni. In 1945 she was admitted to the Athens School of Fine Arts, studying under sculptor Michael Tombros. In 1949 she gave birth to her third child, Alexandros.

After finishing her studies, Alex Mylona devoted herself wholeheartedly to art, participating in several group exhibitions. In 1960 she represented Greece at the Venice Biennale, her sculptures drawing the enthusiastic support of art critic Herbert Read. In the 1960s she took part in several important Biennales and other international exhibitions in Alexandria, Paris, Montreal, Brussels, Buenos Aires and Budapest. During that period she also kept a workshop in Paris, located near Montparnasse. In 1980 she moved her workshop to the district of Le Marais. Living in the French capital she had the chance of meeting important sculptors, such as H. Arp, A. Giacometti and O. Zadkine, and painters like J. Atlan.
Her solo exhibitions denote and reflect the different stages of her artistic and personal development. The 1961 "Parnassus" exhibition was a retrospective dominated by compositions originally exhibited in Venice. In 1976, at the "Polyplano" art gallery, she presented her projects on volume and void, while in 1984, at the Athens Art Gallery (and later, in 1988, at the Parisian gallery "Denise René"), she presented her investigations on the archetypal forms of the circle and the square expressed on marble. In 1986, the National Gallery - Alexandros Soutsos Museum in Athens hosted a large retrospective of her work.
In addition to sculpture, Alex Mylona created several works on paper, was involved in painting and designed sets and costumes for performances by Rallou Manou's Hellenic Horeodrama group. Mylona's creative work was in step with contemporaneous modern and progressive art movements, while also highlighting her Greek descent and the international dimension of her compositions. In her later years, she founded the Alex Mylona Museum, looking for a permanent, public home for her works and for a place that would always welcome the works of young aspiring artists.